William absolutely loves hockey!!! So unfortunately now I have two people in the house wanting to watch hockey and it’s harder to say no the little one asking. William has taken over the living room rug as his ice. He will not allow anyone to lay on it, change his diaper on it or put anything on it. This has caused the odd sibling dispute. He plays hockey on there anytime we are home and announces the plays as he goes.

On Wednesday, January 13th at the CJVR CK750 sponsor Melfort Mustangs hockey game in support of the Heart and Stroke Foundation William was the 7th man. He went in the dressing room before the game to meet the players, watched the warm-up from the player’s box and was on the ice for the national anthem. Then the highlight for him was when he got to drop the puck to start the game. He told me that he gets to be the referee for the game. He was beyond excited and I cannot thank the Melfort Mustangs enough for this opportunity. 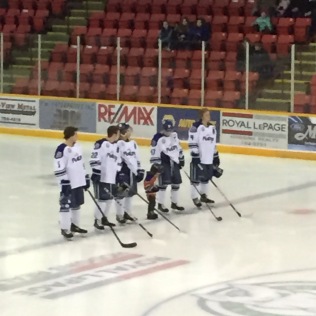 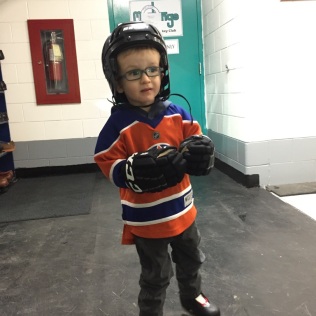